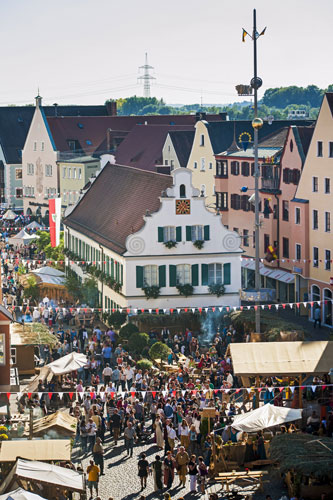 Discover the 1000 year old village of Aichach.
Aichach is just a short ride from Munich, on the way we pass by the old village of Dachau (806); entering a landscape of beautiful rolling hills and rural countryside. Here farming is the most important industry but there is a great deal more hidden here, including the early family history of the famous Bavarian family Wittelsbach. 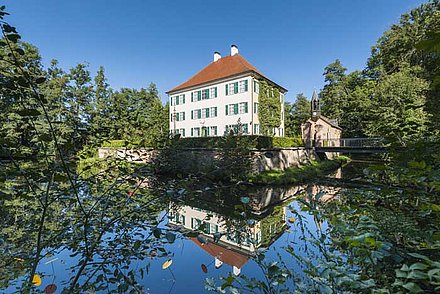 In this region of Bavaria one can go back in time and feel the history around you. We will visit the majestic Palace of Unterwittelsbach, where Sissy the Empress of Austria once played as a child during her early childhood days. 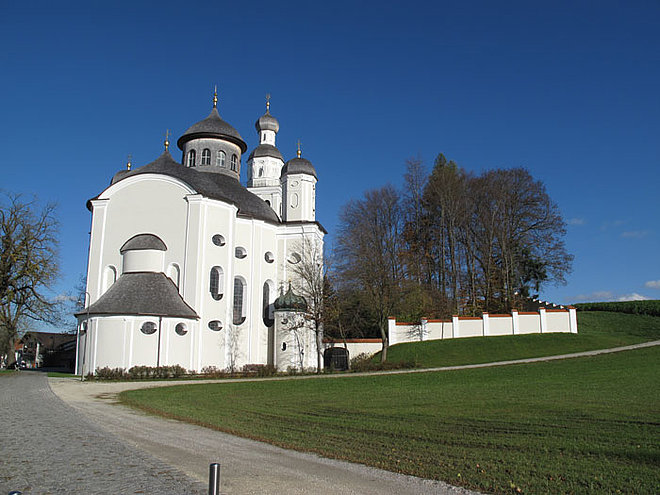 The old village of Aichach with its slow pace is close by with a classic town gate and cobble stone streets which has attracted many artists; making this the perfect place for lunch or just coffee and cake before returning to Munich.
On the way back we will stop by the famous Rocco church of Maria Birnbaum before our ride back down the country roads to Munich. 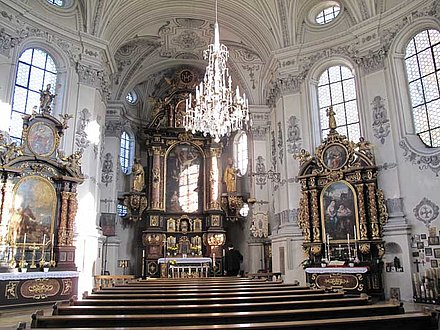 Aichach can look back on nearly 1000 years of history. In the second part of the 11th century (befor 1078) the church of Aichach appears in a chronicle of the cloister St. Ulrich and Afra in Augsburg for the first time. The settlement is certainly older.
1115: for the first time, Otto, one of the dukes of Scheyern, is mentioned. He builds a stronghold in the town-area for the Wittelsbacher, who become the reigning dynasty for centuries. A short time later, Otto of Wittelsbach appears as Count Palatine of Bavaria and consequently as Lord over all the royal goods in the area around Aichach and as the highest judge in Bavaria.
About 1135/40: In an undated document a certain Gottfried and Hermann of “Aichahe” are named for the first time, presumably the Count Palatine of the Wittelsbacher’s servants. This is the reason for the assumption that the Count Palatine had built a castle in Aichach.
1177: A document mentions a “burgus” Aichach. Presumably, it refers to the settlement in Oberwittelsbach, which belongs to the castle.
1180: Friedrich Barbarossa enfeoffs the Count Palatine Otto the elder (1183) with the dukedom of Bavaria. The dynasty reigns in Bavaria until 1918.
1209: The last Count Palatine Otto VIII`s castle in Oberwittelsbach is destroyed. He had been outlawed, because he had killed the staufish king Phillipp of Schwaben in Bamberg in 1208. The count Palatine’s possessions in the area around Aichach is returned to the line of the Wittelsbacher.
1210: Ludwig I of the Kehlheimer gives the church of Aichach to the German order.
About 1230: Aichach is the seat of a ducal caste-office, which soon embraces the area of the later district and the area around Friedberg and Schrobenhausen as provincial court.
1250: a Komtur as leader of a house of the German Order in Aichach is named for the first time. Aichach was the seat of a German Order “Kommende” until 1384, which was transferred to Blumenthal and existed until 1806.
1331: The earliest record of a wall around Aichach dates back to this time. 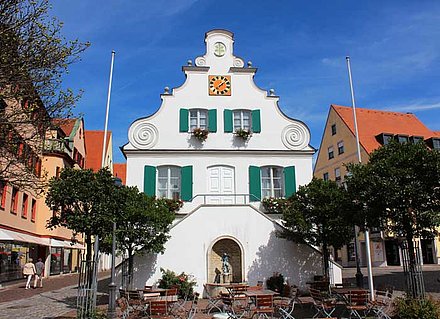 1347: Emperor Ludwig of Bayer confers “our town Aychach … the rights … which the citizens of Munich … also enjoy”
1354: The bishop of Augsburg authorised the founding of the hospital by the citizen Konrad Werder and his wife Elisabeth.
1394/95: The duke Johann II of Bavaria-Munich twice besieges Aichach, which is held by his brother Stéphan III of Bavaria-Ingolstadt.
1418: duke Ludwig the Bearded of Bavaria-Ingolstadt authorises the fortification of the town, which can still be seen in artistic inscription-boards on the hospital-church and by the town-gates and rests of the wall.
1504: emperor Maximilian I personally comes to Aichach to negotiate on the vacant dukedom of Bavaria-Landshut with 23 other councillors and legations in the town hall.
1634: After an occupation, the town burns down almost completely. During the Thirty Years’ War, the troops of various parties marched through the destroyed town along the road from Augsburg to Regensburg again and again. The general of the Swedes Gustav Horn and the Emperor’s generals Aldringen and Jan van Werth fought each other in an attempt to capture Aichach.
1704: English, Dutch and Spanish troops come to Aichach and the duke’s castle is destroyed during the war of the contenders for the Spanish throne.
1792: in Aichach, 24 watch-makers mainly work for the export outside of old Bavaria. 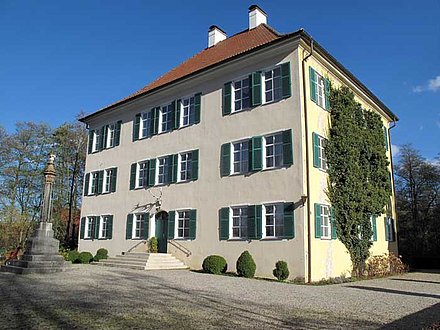 1796: French and Austrian troops march through the town in times of war, when they take up their quarters in and around Aichach, to the dismay of the citizens.
The brewer Lorenz Alois Gerhauser’s hotel in the centre of the town even houses, among others, the French general Saint Cyr and in 1799 even the leader of the  Cossaks Rimsky Korsakov.
1812: Ludwig Steub, who later came to Greece with king Otto I and who became discoverer of the beauty of the Alpes-area by his travel-reports about Tirol and about customs in the Bavarian highlands, was born in the town-scribe’s house.
1875: the railway-line Augsburg-Aichach-Ingolstadt was opened.
1904-08: Aichach got the big women`s prison.
1913: Opening of the postal carriage link Aichach-Altomünster.
1918: Aichach alone suffered 131 casualties during World War I.
1925: A deep well was built to provide the water supply for the town.
1931: An outdoor swimming pool was built.
1934: Construction of a new post office in Bahnhofstraße and of the public health office.
1935: Construction of a new housing estate.
1945: During the the American invasion, a woman was killed, but there was hardly any further damage. 258 citizens of Aichach lost their lifes in World War II. 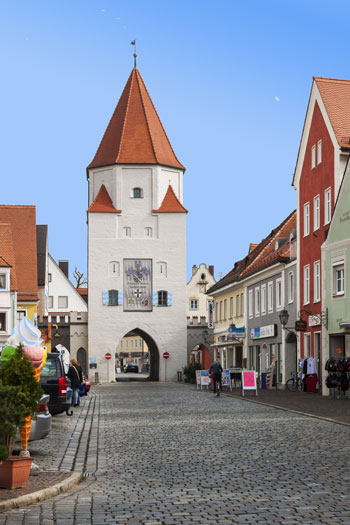 1958: Inauguration of the new state school in Ludwigstraße.
1966: Topping-out ceremony at the principal building of the new “Kreiskrankenhaus“ (district hospital).
1967: Classes commence at the new secondary school.
1972: As part of the regional reforms, the districts Aichach and Friedberg are joined. Aichach remains the administrative seat. Josef Bestler is re-elected as district administrator of the district Aichach-Friedberg. Alfred Riepl becomes mayor. Surrounding areas are incorporated in Aichach by these reforms.
1972: Inauguration of the new school in Jahnstraße.
1974: Classes commence at the grammar school (17th of September).
1978: Occupation of the new district administration office in Münchner Straße and opening of the national road 300 (B 300) as a by-pass around the town.
1980: Construction of a big stadium by the district. The town celebrates its 750th anniversary.
1987: New construction of the administration building I at Tandlmarkt 13. 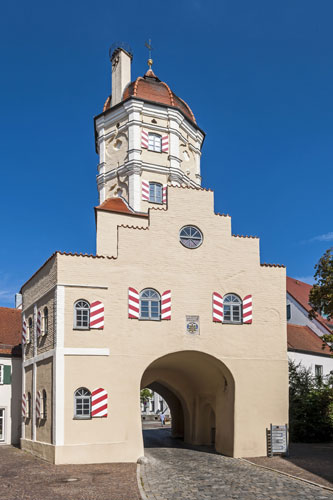 1987: New construction of an underground car park in Schulstraße/Martinstraße.
1991: Signing of the town twinning treaty with the market municipality Brixlegg in Austria.
1992: Signing of the town twinning treaty with the town of Schifferstadt in Rhineland-Palatinate.
1994: Opening of the new thoroughfare in Griesbeckerzell.
1995: Construction of a new wing of the kindergarten in Klingen.
1996: Completion of the outdoor swimming pool and the primary school in North Aichach.
1997: Biomass heating plant in North Aichach goes into operation.
1997: The town celebrates 650 years of town status
1997: Completion of the Edith-Stein-School
1998: New building and reconstruction of the sewage plant.
1999: Acquisition of the watercastle in Unterwittelbach by the town of Aichach.