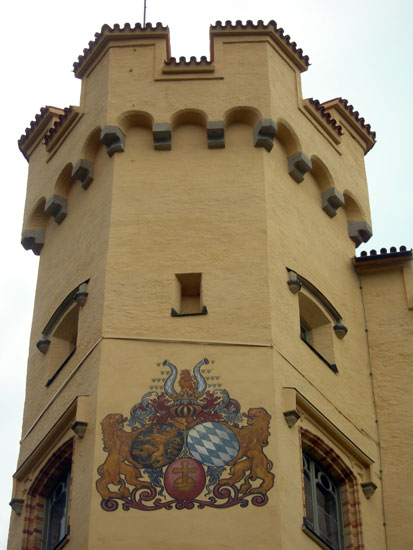 King Ludwig's II Neuschwanstein Castle Tour has so many options that I can name only a few like Oberammergau, Linderhof, Neuschwanstein and Hohenschwangau.

This tour holds some of Germany's most popular touristic areas. We can make this tour according to your personal interests and tastes. As a historian on Ludwig I know many things that you would never hear anywhere else. Read the many comments from my guests who have made this tour with me in my references. The area holds the best that Bavaria has to offer in landscape panoramas and architecture.

Looking through King Ludwig's eyes makes this dream tour into reality!
On this Day Trip we will depart Munich at 8:00 AM in the morning and drive through the rolling countryside arriving at the foot of the Bavarian Alps, arriving at the world famous castle of Neuschwanstein. Neuschwanstein Castle; the dream home of King Ludwig II of Bavaria!
Door to Door service is yours with all my tours, beginning and ending at your Munich Hotel. Relax and enjoy your holiday with me as your driver, guide, and translator. 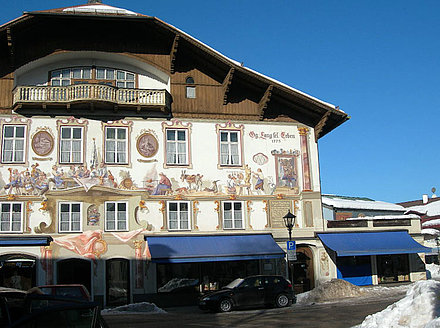 The Neuschwanstein tour has many options which can be changed even while traveling. Entering the Alps you pass through a weather border. This is the entrance to the Alps; from here we will make our way to village of Oberammergau. Birthplace of the famous Bavarian playwright of Ludwig Thoma 1867-1921, also editor of the "Simplicissimus".
Oberammergau is known for the Passion Play performed every ten years. The painted houses and the fine art of woodcarving add to its many charms. Here is a paradise for those who wish to shop for Christmas decorations on a year round basis. 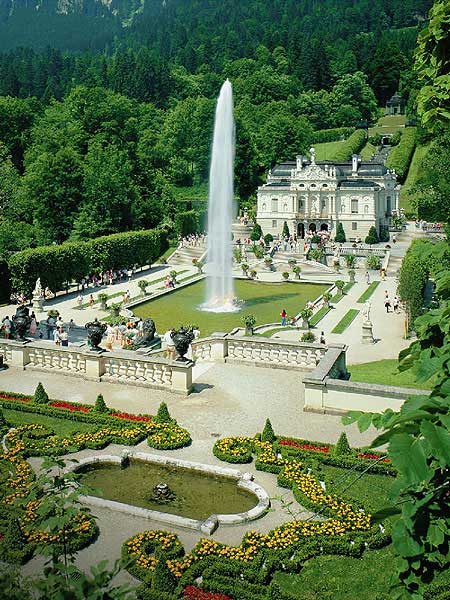 After a shopping interlude we continue on to Ludwigs retreat Linderhof Palace. View of the main, south-north axis of the central complex, with the Linderhof palace in the middle.

Just a little history about where the name Linderhof came from. The first know owner of this former farm or in German Hof was from the family of Günter von Linder and Hans Linder who were mentioned in 1479; King Ludwig II adopted the former owners name calling his Palace Linderhof. 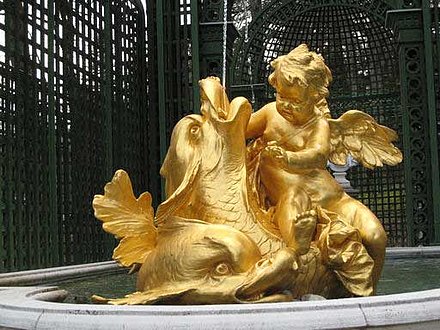 Fountain - angel with fish monster - in Linderhof Palace Garden. You will also find an other fountain in front of Linderhof palace. (Geyser 50 meters) 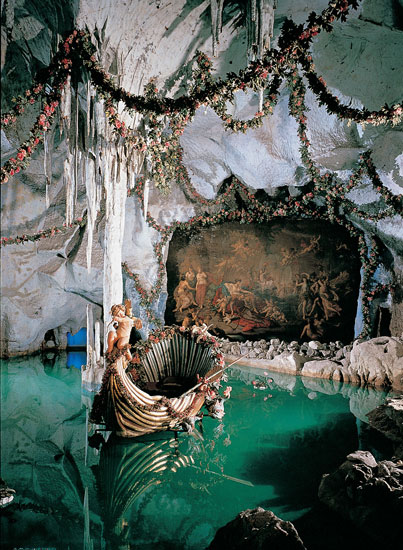 Ludwig II embellished the park with architectural features. Be inspured by the Orient or Wagner's operas, such as the Venus Grotto. 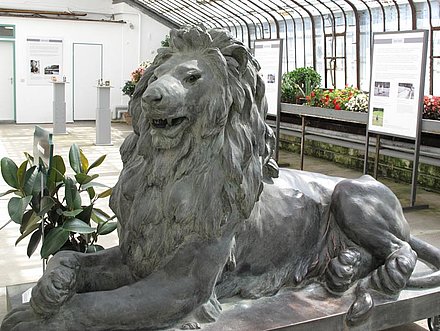 A important part of the Code of Arms of the Wittelbacher family is the Lion. Ludwig's lion was show in the summer of 2009 at special exhibition held in the green house of Linderhof. The show was concerning the garden its maintance and planning as ordered by King Ludwig II. The lion is waiting to be restored before it takes its place in front of Linderhof Palace again. 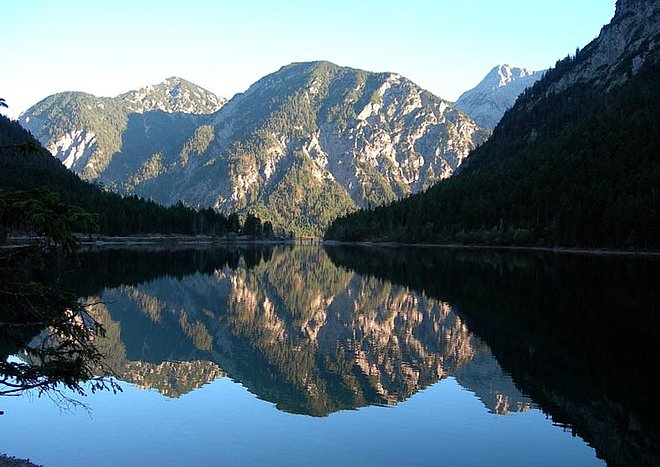 Lunch is of course important now; and I always have some nice surprises. If the road is open I will treat you to a photographic delight.

King Ludwig II of Bavaria allowed no visitors to his Neuschwanstein castle. But it is stated that since the doors have been open to the public in 1886 over 50 million guests have entered the holy halls of Neuschwanstein Castle.
One guest was Walt Disney who used Neuschwanstein for the Sleeping Beauty Castle in Disneyland. 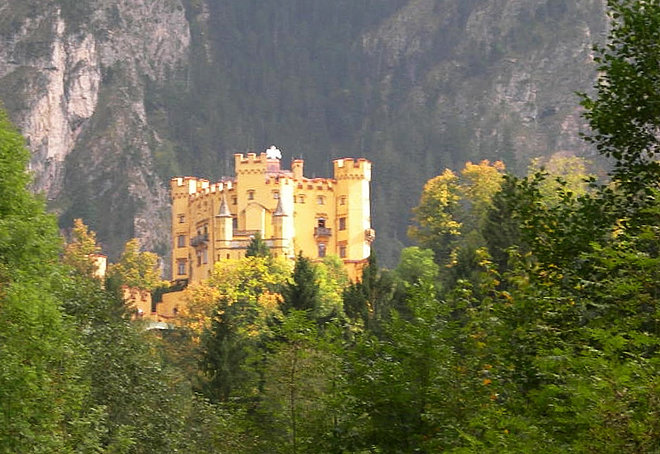 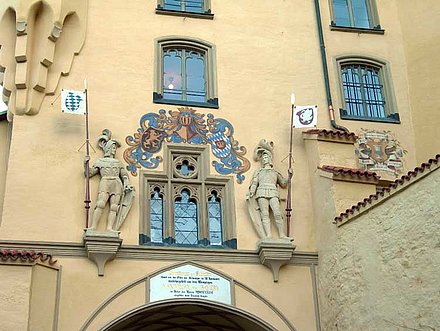 The Entrance to Hohenschwangau Castle with Bavarian Code of Arms, belonging to the Wittelsbacher Family. 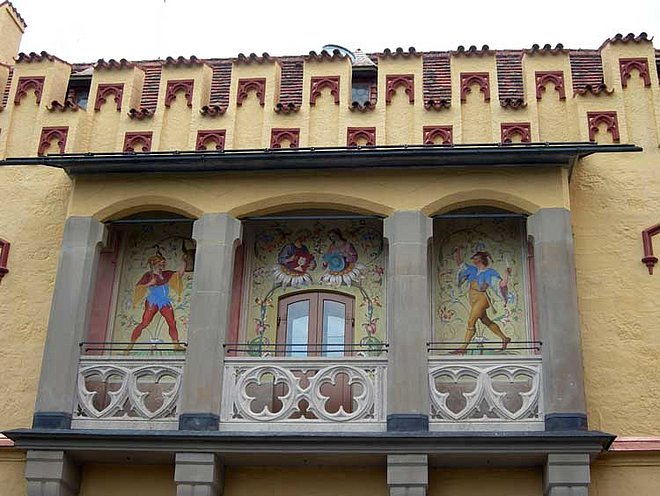 Remember to ask me about the mystical stories concerning Ludwig's childhood, which made him famous as the Fairy Tale King! 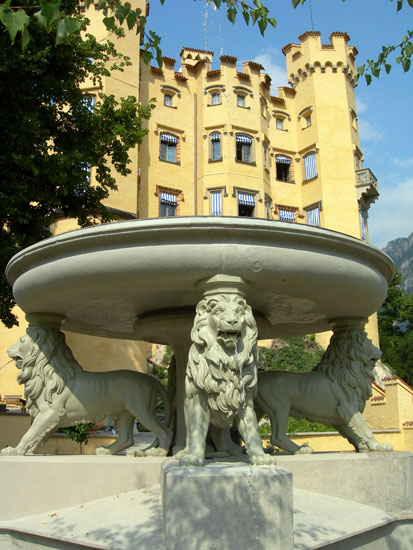 After our visit to Neuschwanstein and Hohenschwangau castles, we may visit several Rococo churches before our return trip to Munich when time allows. 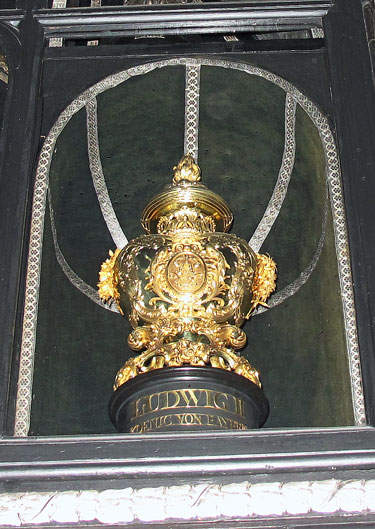 The hearts of the Bavarian Kings are located in the small chapel of the Black Madonna in town of Altötting.
Here the Golden Cup holding the heart of King Ludwig II of Bavaria 1845-1886 is shown. 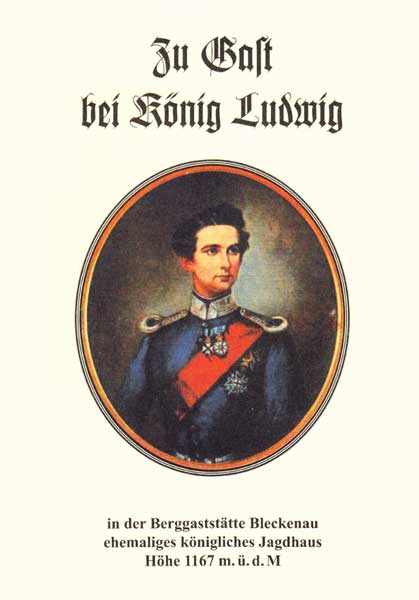 Should you decide on my Ludwig tour to visit only Neuschwanstein Castle on the inside, then we will have lunch in the nearby Hunting House of the Bavarian Kings. The former hunting house in located at 1167 meters above sealevel. This is a rustical alpine hide-away called Bleckenau. 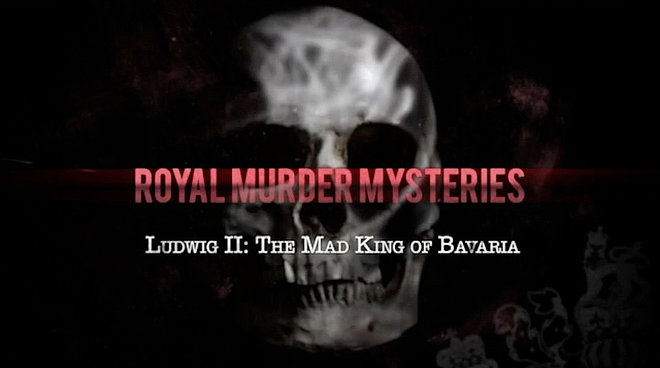 The source of this information is from an article in a book named, (Bayerns  Märchenkonig by Anton Sailer  1983).  Page 166 and titled, "Ludwig II. – auf der Flucht erschossen?" *

Everything which has been written concerning the death of King Ludwig II of Bavaria can only be seen as theories since there is no conclusive evidence to be found anymore. Different ideas and theories leave much room for thought. Here I have translated from the article and from the book which the article has been taken from:

In the late afternoon of June 13, 1886 the Priest Michael Beck from the parish of Aufkirchen was called to come to the Palace of Berg on the lake of Starnbergersee. He had been called to give King Ludwig II of Bavaria his last rights according to Roman Catholic traditions at 16:30 hours, as the King was dying. The Priest performed the last rights which consist of touching the forehead, hands and other parts of the body. He was not allowed to see or touch the back of the King.

The courts personal had been ordered to stop him physically in his duties, which meant that the complete traditional service could not be performed correctly. Beck then wrote a complete report of this situation which he gave to the Archbishop of Munich. His report stated clearly that the King was still alive and that the courts personal had prevented him from completing the Kings last rights.

Becks statement does not fit with the official statement which states that Ludwig and Dr. Gudden had started their walk in the park at 18:00 hour.

A telegram had been send to Munich at 22:00 hours stating that the King and Dr. Gudden had gone for a walk but not yet returned.

* Anton Sailor states in his book how he thinks it could have been.

At 15:00 hours King Ludwig II and 75 year old Psychiatrist Dr.Gudden departed Palace of Berg for a walk by the lake. At about 16:00 hours the King all of sudden ran towards the lake, Dr. Gudden ran after him trying to stop him. The security officers who had been following them out of sight then opened fire using a rifle called an windbox. Gudden was shot by mistake as he tried to stop the King and Ludwig was shot twice in the back, which did not kill him.

Beck said he had seen drowned victims many times before and that this was not the case here. According to Beck the King died shortly after being given his last rights at 17:00 hours. The Roman Catholic Church should have the complete records of this information.

You may also find Ludwig’s last letter of interest:

26 August 2016 – Süddeutsche  Zeitung  by Hans Kratzer, Translated from German to English using Google Translate with a little help from John.
Last letter of King Ludwig II. Staatsstreich on Bavarian (A stately act against a Bavarian) 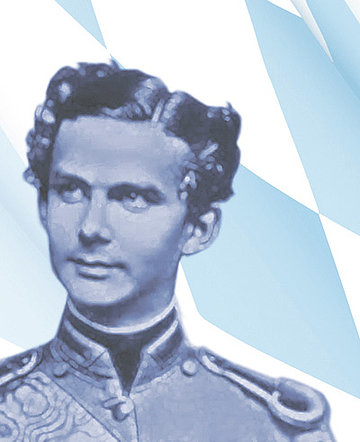 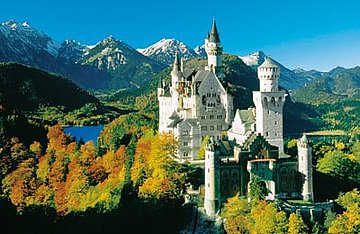 Let the Exclusive Class of Johns Bavarian Tours make this dream holiday easy and extremely comfortable for you with a special offer. 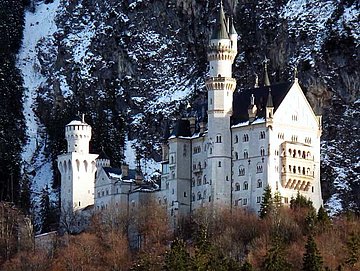 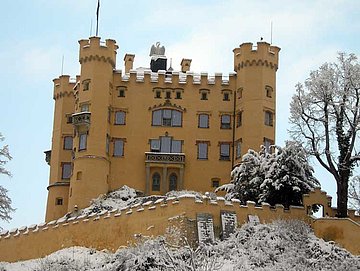 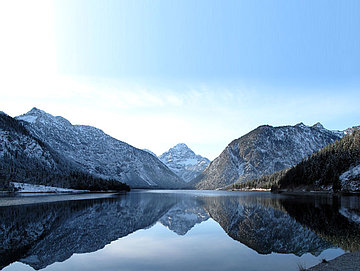